Critics: Paid to Not Know Anything 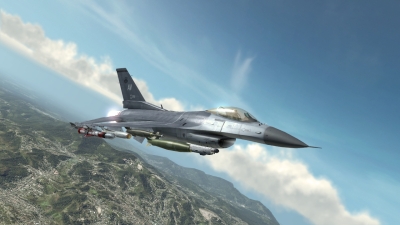 That’s right, a 6.7! Once again proving that critics are paid to not know anything. So here’s a breakdown of the idiocy:

7.5 Presentation
The look does a good job of staying consistent with other Tom Clancy games, and the unlock system and stats at the end of a multiplayer game are definitely cool. (Well said)
7.0 Graphics
A general lack of detail hurts, as does the lack of speed, but explosions look cool. Seeing American landmarks from 30,000 feet never gets old. (Lack of detail? Lack of speed? Wtf game were you playing?)
7.5 Sound
Explosions have a good thump if you’re close enough, as does as shattering the sound barrier. Music could be better and voiceovers are plain boring. (Music? Voiceovers? Why do these matter? SHOOT DOWN ZE PLANES!!!)
6.5 Gameplay
Uninspired mission design and aerial combat that’s arcadey to a fault don’t help. Co-op is fun and multiplayer is too until the one mode gets stale. (Excuse me, how exactly do you “inspire” mission design in a combat flight sim?)
7.0 Lasting Appeal
The co-op is fun, but the lacking multiplayer is a bummer. Experience point, challenge system, stats, and unlocks help out keeping things as fresh as possible. (Not sure what you mean about the multiplayer…)

I literally just finished playing about an hour’s worth of the Tom Clancy’s H.A.W.X. demo (aka HAWX) available for free to Xbox Live users. I have to say, even with the incredibly high expectations I had for this game, I was still impressed.

I have always loved Tom Clancy games, from Rainbow Six to Ghost Recon, from Splinter Cell to EndWar. But Clancy is breaking new ground in HAWX, going head-to-head against console air combat giant Ace Combat, and it is clear that his dev team was prepared.

HAWX pulls out all the stops, and presentation is impeccable (typical for Clancy’s games). What really stands out are the differences between the very popular Ace Combat series and this game. One of the cornerstones of the dogfighting combat in HAWX is the ability to turn off computer assistance, which allows you to perform some dangerous aerial maneuvers in order to pick off attackers, but also leaving you vulnerable to stalls.

Another neat feature is the ability to let your aircraft’s computer plot a course for you, whether it’s so you can intercept an opponent, evade a missile, or attack an obscured ground target. The game automatically assists you in following these targetting “gates,” making it genuinely fun to use this innovative feature. 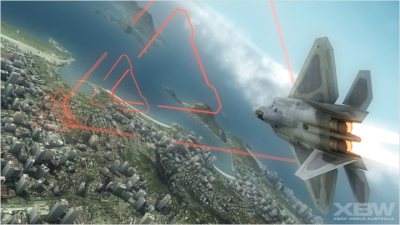 HAWX gives you helpful guides for plotting the best interception or evasion course.

Besides the huge additions to the well-known Ace Combat gameplay, this game is simply beautiful to look at. The lighting, the smooth graphical detail, the nearly perfect rendition of real fighter jets, and the incredible cityscapes make it an amazing visual experience.

As always, wait until final reviews are released before preordering or buying the game. That said, Tom Clancy’s H.A.W.X is definitely a game to keep on your radar.